At precisely 12 noon the mayor taps the keg

The keg is tapped! Oktoberfest may begin

Fairgrounds seen from the Ferris wheel

If it’s September, it must be Oktoberfest!

Oktoberfest is held on the Theresienwiese (Therese’s Meadow), locally die Wies’n, fairgrounds named in honor of Princess Therese, located 1 km southwest of Munich’s main train station. Today, the fest could really be called Septemberfest because it’s been moved up a month to take advantage of the better weather.

To figure out the formula for future Oktoberfest dates is easy: The fest always finishes on the first Sunday in October (unless the October 3rd German Unity holiday falls on the succeeding Monday or Tuesday then the fest wraps up on either day) and begins two weeks prior on the Saturday. For example, the dates for Oktoberfest 2022 are September 17—October 3 (Monday); 2023: September 16—October 3 (Tuesday); 2024: September 21—October 6 (Sunday); 2025: September 20—October 5 (Sunday).

Leading up to the official start of Oktoberfest is the traditional opening-day parade, since 1887, known as the Festival of Innkeepers, which begins in the *city at 10:45 and finishes on the fairgrounds at 11:45. (*Consider viewing the parade from an elevated position at the intersection of Schwanthalerstrasse and Sonnenstrasse.) The parade is a hour-long procession of horse-drawn brewer wagons transporting the ceremonial first beer kegs to their respective tents. The guest of honor, seated in the leading wagon, is the Bürgermeister, or mayor of Munich, who will tap the first keg at noon to kick-start Oktoberfest. Catching a lift on the following wagons are the brewery owners and executives, their friends, family, and bar staff (many of whom are full-bosomed Frauen donning provocative dirndls). Once the wagons arrive at the fairgrounds, the climax is not far off. At the stroke of 12 noon, in the Schottenhamel tent, the Bürgermeister clobbers the very first keg of Oktoberfest beer with a wooden mallet and proclaims, “O’zapft is!” (It’s tapped!) At that moment, twelve cannon volleys ring out across the Wies’n, puffs of smoke burst overhead, high in the sky, officially signaling the start of Oktoberfest to the other tents and that beer can be served, precisely when an army of determined barmaids begin the mad dash of carrying fistfuls of frothy mugs to dry-mouthed patrons crying out for beer like nesting chicks begging their mother for food. The rest of the day, for many, is a blur!

The prelude to the second day of Oktoberfest is another traditional parade, since 1835 (the Costume and Riflemen’s Parade), but this one happens to be the largest and most beautiful and historically rich costume parade in the world, comprising some 7,500 participants marching in a 6-kilometer-long spectacle from Maximilianstrasse (10:00) through the city to the fairgrounds (13:00). The participants are members of folk clubs from all parts of Germany, and Europe, proudly displaying their regional colors and garb, historical uniforms and (in many cases) musical accompaniment. This is truly a pageant not to be missed. If you can’t make it to the city, the parade will be televised live on German TV. Note: After the parade, many of the fantastically dressed participants will be wandering around the fairgrounds, presenting you with more wonderful photo opportunities.

At Oktoberfest you’ll see men wearing Lederhosen, or leather pants (with suspenders), and women dressed in Dirndls, a flattering frock generally consisting of three parts: body (skirt and bodice), blouse, and apron. At the waist is a bow. Men must pay particular attention to which side this is tied: right means ‘taken,’ left means ‘single.’ 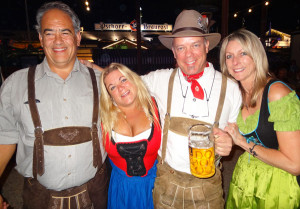