Brett Harriman hand-drew the following map to give you a better idea of how to get to Oktoberfest, the tent locations and the short distance from the main train station 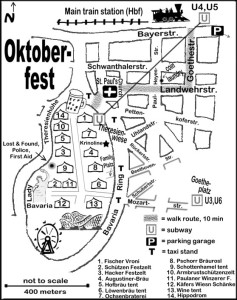 (locally Hauptbahnhof) to the fairgrounds. Note the tent numbers correspond with their listing on our beer-tent list.

Links you may find helpful on your quest to the fest are the German National Railway (Deutsche Bahn), the Munich public transportation system (MVV), Munich Airport (MUC), and the Munich tourism office.

as Brett’s hand-drawn map illustrates, from the main train station you can either ride the subway one stop to Theresienwiese (U4 or U5, descend escalators by track 11) or by foot it’s an easy 10-minute walk—exit on the Bayerstrasse side of the station and cross with the traffic signal into Goethestrasse. Continue straight along Goethestrasse two blocks and make a right onto Landwehrstrasse. Behind the magnificent church you’ll see in front of you is Oktoberfest. Note: From atop the magnificent church (St. Paul’s) is an equally magnificent view (3€/adult, 252 dizzying steps).

to beat the traffic, your best bet is to ride the subway straight to the fairgrounds (see Railers above). Pull into a Park+Ride (P+R) located outside the city, off the autobahn. (Make sure the P+R is connected with public transportation, i.e. the subway.) But if you prefer to drive as close as you can to the fairgrounds, from the autobahn head towards Munich. Eventually, you’ll come across (or merge with) the so-called the Mittlerer Ring—take this West and exit at Landsberger Strasse, then head straight towards the city (Zentrum). The fairgrounds (Festwiese) is within a few kilometers. Be patient; traffic may be snarled. Park in a garage or wherever you can legally then follow the crowds to the festival. Prost!

(Map points to the front, or north, entrance of the Oktoberfest fairgrounds)

Behind the Schottenhamel tent (west side of fairgrounds) you’ll see a white balloon in the sky with a red cross; the balloon is tethered to the command center for police (Polizei), medical personnel (Erste Hilfe), and Lost & Found (Festleitung, daily 9:00-23:00). Note: Lost items are kept here until shortly after the closure of Oktoberfest, at which time they are shuttled over to the Lost & Found head office (Hauptfundbüro, Mon-Fri 8:00-12:00, located at Oetztaler Strasse 19, Munich-Sendling, U6 Harras) but only until the end of January (have a local person phone them in advance for you to get the latest information).